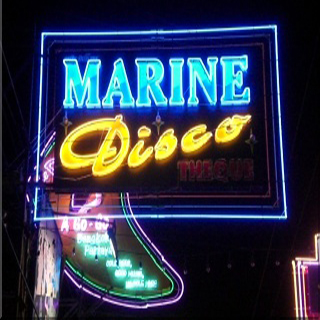 While there are a number of discos on Walking Street, and it seems like there are more opening all the time, Marine Disco is one of the older ones in operation and it still draws big crowds – as in hundreds of people at any given time. In many ways it's not unlike a huge night club one would find in Europe or North America: a huge dance floor flanked by two bars and a large numbers of tables, big-screen TVs, pool tables in the back, and a sound system that will loosen your fillings.

It's a popular after-hours spot, and on any given night you'll find a number of ladyboys here (in low season pickings may be slim, however), particularly after 2 a.m. Some of them are there just hanging out with their mates and may or may not be looking for a date, but then many are usually bar girls who haven't gotten a barfine that night and have come to Marine Disco in search of custom. These girls are easy to spot: make eye contact and they will probably come up and talk to you before you can make your own move.

As for the club itself, if you like night clubs, you'll be okay with Marine Disco. It's not the hippest night spot one can find, but the local DJs tend to spin a mix of what's popular at the moment, while sneaking in some Thai favorites here and there. The crowd is mostly tourists with a sprinkling of expats and local Thais (aside from the bar girls looking to ply their trade after hours) – you'll see people up dancing on platforms that would never dream of doing such a thing back home – which adds to the fun. It's almost impossible to hold a conversation without shouting though; if you see someone you like and buy her a drink, you may want to head back by the pool tables where the volume isn't quite so loud.