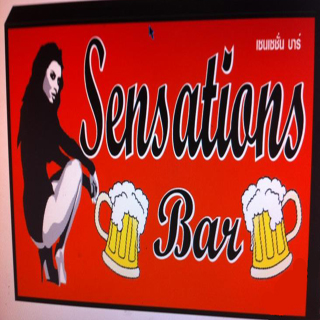 Located in a newly-opened beer-bar complex on south Soi Buakhaow, Sensations is one of the new bars on the Pattaya Ladyboy scene, having recently celebrated its first anniversary. It may have only opened a year ago, but in that time this laid-back bar has rapidly become a favorite with many ladyboy lovers. Not only does it tend to have gorgeous stunners on a staff comprising fresh-faced girls new to the scene as well as long-time veterans (who will rock your world, trust us), but it's another bar known for its epic blow-out parties.

Sensations is also home to the ladyboy world's media darlings, Scott and Paeng, who have been featured on Sky Television's documentary series on Thai ladyboys in the U.K. Paeng is the ladyboy owner of the bar, and Scott is her boyfriend, who can be found in the bar most nights. They've created a easy-going, no hassle, laid-back atmosphere, and this, combined with the beautiful ladyboys, has made it – dare we say it? Yeah, we will – a Sensational success.

Also of note: the pool table is free! But beware, some of the older girls are crackerjack shots, so you better be on top of your game if you put your name up on the board to play.