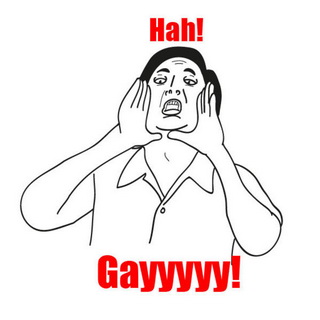 Yes, very gay.. Well that's what some people will tell you.

Discovering an attraction to ladyboys can be a confusing time for any guy. And one of the first questions that’s going to be constantly in the back of your mind is.. Am I gay?
For the sake of this article I’m talking about guys who originally liked girls before discovering the beautiful third sex and developing an attraction to ladyboys and transgendered girls. I’m aware that there is a percentage of guys who like ladyboys who were previously bisexual or gay, but in order not to complicate things too much I’ll write this from the perspective of guys who were previously seen as being 'straight'.

As I stated in the opening, one of the first thoughts to trouble any man who discovers an attraction to ladyboys is whether he is gay, or moreover, whether other people will see him as being gay, and how that will impact his life. This isn’t just an issue for newbies to the world of ladyboys, many long time ladyboy lovers will battle the same anxieties, with some guys even having periods of choosing to try to ignore their attraction to the third sex, trying to repress their sexual desire and emotions. This stuff can really go deep and give some guys an internal battle, so it helps to try to have a better understanding.

Does the being 'gay' depend on what sexual acts you perform?

Some people would argue yes, this guy was right, the guy who did 'everything' was the gay one, or at least 'more gay'. But in truth, the sexual act is irrelevant. Gay is a sexual orientation, it is about sexual and emotional attraction, it does not depend on the sexual acts you perform.

Here's a dictionary definition for you:

So if sexual acts are irrelevant to your sexuality, does it depend on the stage of transition of ladyboy or transgendered woman you are attracted to? Are guys who like post-op ladyboys (ladyboys who have had their penis removed and replaced with an artificial vagina) straight (or more straight), while guys who like pre op ladyboys are gay (or more gay)? Some transgendered girls will look and act more feminine and 'ladylike' than most real women, but is it your sexual organ that determines what gender you are?

In the UK and parts of the Europe, transgendered girls can apply for a Gender Recognition Certificate without having sexual reassignment surgery (meaning they still have a penis). The prime criteria for getting this certificate is to prove you have Gender Dysphoria, which basically means you feel uncomfortable with your birth gender. You don't need to have any surgeries or change your body in any way, you just need to be psychologically evaluated by a professional and have them recognize you as having Gender Dysphoria. Once you have a Gender Recognition Certificate you are than legally considered to be Female, regardless of what genitalia you have.

In contrast to this, in Thailand and many other countries, a person cannot change their gender identity, and gender is legally seen as something permanent. A Thai ladyboy may look, act, and feel totally feminine, everyone she meets and interacts with may see her as a female, and she can even have every gender surgery available to transform her body, but her passport, ID, and government papers will still recognize her as being male.

In order to really understand any sexual labels we have to first come to the understanding that gender is a social construction, and the idea that people are simply born 100% male or 100% female is extremely outdated – BUT the function of modern society and the vast majority of communities in the world depend upon a very black and white view of gender and sexuality.

Most ladyboy lovers don't battle with a gender identity issue, and don't grow up with confusions and contradictions over their own gender identity, seeing themselves fitting neatly into the role of a male, and a straight one at that..

Fitting comfortably into a gender role then makes it harder to accept that binary gender (male and female) isn't actually right or 'real', and that we are all fluid beings who can't be defined as being simply 'one of the other.' Despite feeling an attraction towards transgendered girls, in the most part because of their feminine beauty, consciously or unconsciously many ladyboy lovers still see the transgendered girls as being male, and themselves as being attracted to other males. Even those who are able to be totally open minded and accept transgendered girls as being female, or at least more female than male, they know that in the eyes of many of their friends, family, and peers, the person they are sexually attracted to will not be accepted as being a female.

So am I gay or am I straight?

If anything, I have probably caused more confusion here than clarity, but then again, that is kind of the point.

Strict, binary gender roles are a very old fashion way of understanding gender, and while the world is starting to become more open to transgression in gender and sexuality, it's not quite ready to fully accept women being born as boys, and men being born as girls, or the people who are attracted to them.

With that all said, it would be pretty simple minded, naive, and uneducated to call a male who is attracted to ladyboys or transgendered girls as being gay, because basically they are not, and they don't fit neatly into that category. And yet at the same time, calling them straight wouldn't quite be correct either.

So if I'm not gay and I'm not straight what am I?


Written by: Moo Yung
For the dating ladyboys in Thailand we recommend joining Thai Friendly which has hundreds of Thai ladyboys listed.

FWIW, looking at it from the ts point of view, Jasmint9 (aka Long Mint) was talking about this a little while ago, saying 'men liking ts that not gay   Gay like Gay.'

fuck off mate...if you are here and you believe bullshit then you are gay too.

who cares, enjoy your life.

brilliant that really helped thank you, i have been quite confused lately and it has given me a bit of closure